Why You Shouldn’t Be Using Flash On Your Website

In all fairness, Flash isn’t exactly dead… yet. It is, however, dying a slow and painful death.  Once upon a time it dominated the web. Meant to “wow” an audience, it was flashy with it’s over-the-top whizzing animations and interactivity. But, survey says…. we’re no longer impressed. There is no place for it in the future of website development. If your current website is running this technology, there are certain things you need to know.

Support is almost gone in the mobile world

It’s almost hard to find where flash is still supported. Adobe announced earlier this year that they will not be supporting Flash by 2020.  Apple has already removed support on their iOS devices. Android has not supported this technology since version 11.1. Websites running this technology are cutting themselves off from millions of users and prospects. The below graph taken from Stack Overflow Trends Tool shows the steady decline of usage since 2010. 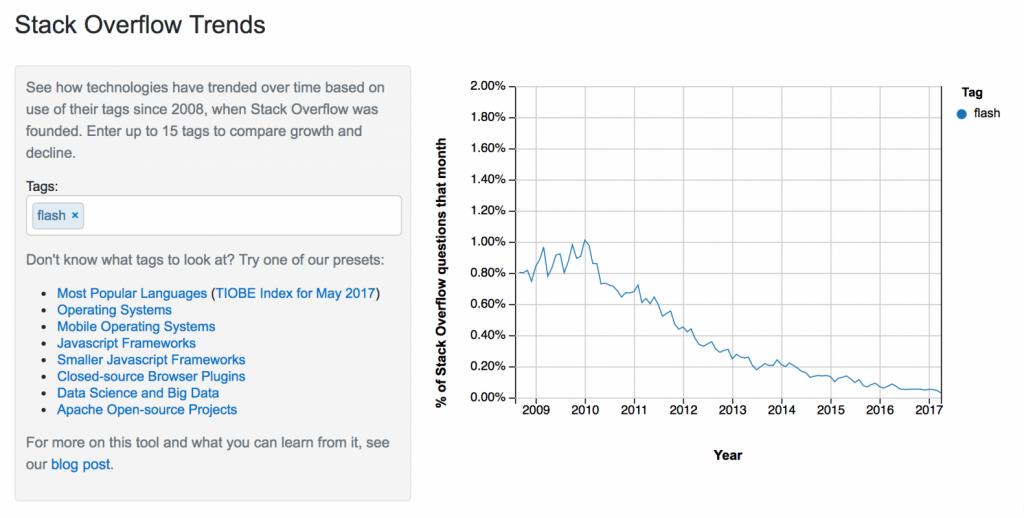 Aside from the above mentioned axing of support across mobile platforms, there are other huge drawbacks to Flash.

Search engines don’t like it. Part of Google’s algorithm used for SEO depends on a user’s accessibility to a website. If the user can’t view it on an unsupported device it’s knocking down your website’s SEO rank and people aren’t finding your website as easily. Search engine spiders can’t parse images, making it difficult for the site to rank high in search engine searches. Those spiders typically have issues following Flash links, as well.

It has a sketchy history of malware, security flaws and bugs that have made it a target for hackers. Nasty code can be fairly easily injected into these websites that can spread viruses and attacks.

It requires a separate player. You know that infuriating update reminder you’re always getting to routinely install and update Flash? Each browser you use needs to have this plugin configured and turned on, which slows performance.

There are huge bandwidth and speed limitations. A web developer must work very hard to optimize Flash in order for this not to be an issue. Applications are often times very large and painfully slow to download. Often times the entire Flash site must be downloaded before it can be used. That time is enough for your website’s audience to grow impatient and leave your site.

Screen readers hate it. Flash sites are based on images and it makes it extremely difficult, if not impossible, for a screen reader to read.

While Flash isn’t really dead dead it’s certainly on it’s way there and for good reason. In order to reach your target audience you need to ensure that your website is easily available and readable to them and that search engine spiders can crawl your site to get it out in front of your potential customers.

Is your site still running Flash? Contact me so I can get you back in good standing with the world wide web!